Question:
What are the literacy levels of adults, and how does the United States compare to other countries?


The Program for the International Assessment of Adult Competencies (PIAAC) is a cyclical, large-scale study of adult cognitive skills and life experiences developed by the Organization for Economic Cooperation and Development (OECD) and, in the United States, conducted by the National Center for Education Statistics (NCES). PIAAC was designed to assess adults between the ages of 16 and 65 in different countries over a broad range of abilities, from reading simple passages to complex problem-solving skills, and to collect information on an individual's skill use and background. The PIAAC literacy framework defines literacy as "understanding, evaluating, using and engaging with written text to participate in the society, to achieve one's goals and to develop one's knowledge and potential." 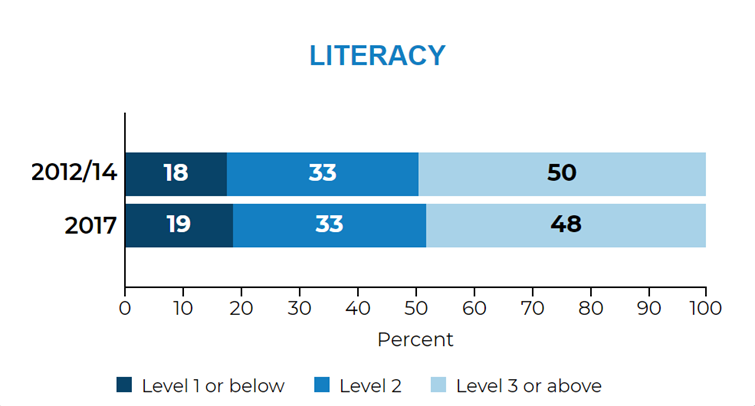 NOTE: Detail may not sum to totals because of rounding. Only statistically significant differences between years are marked with an asterisk. In literacy, higher, middle, and lower performance are denoted by Level 3 or above, Level 2, and Level 1 or below, respectively.

Average scores on PIAAC literacy for adults age 16 to 65 for the United States and highest-performing countries: 201215 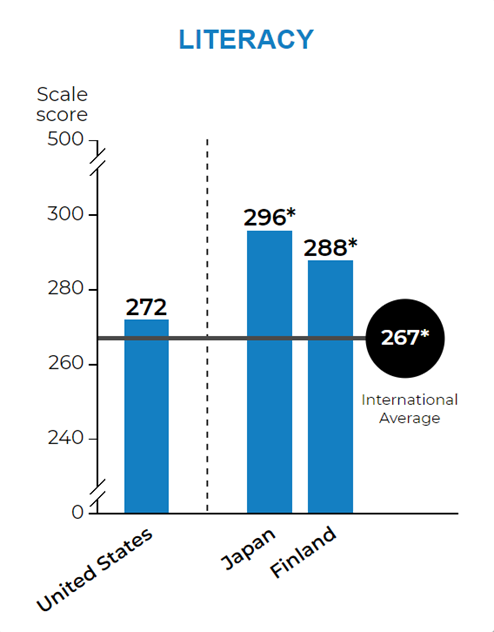 NOTE: Average scores for the United States are compared to the PIAAC international average and highest-performing countries. Results for 23 of the countries were gathered in 201112, and an additional 9 participated in 201415. The two highest-performing countries are shown, in descending order from left to right. Results for the United States are shown on the far left to highlight that comparison.