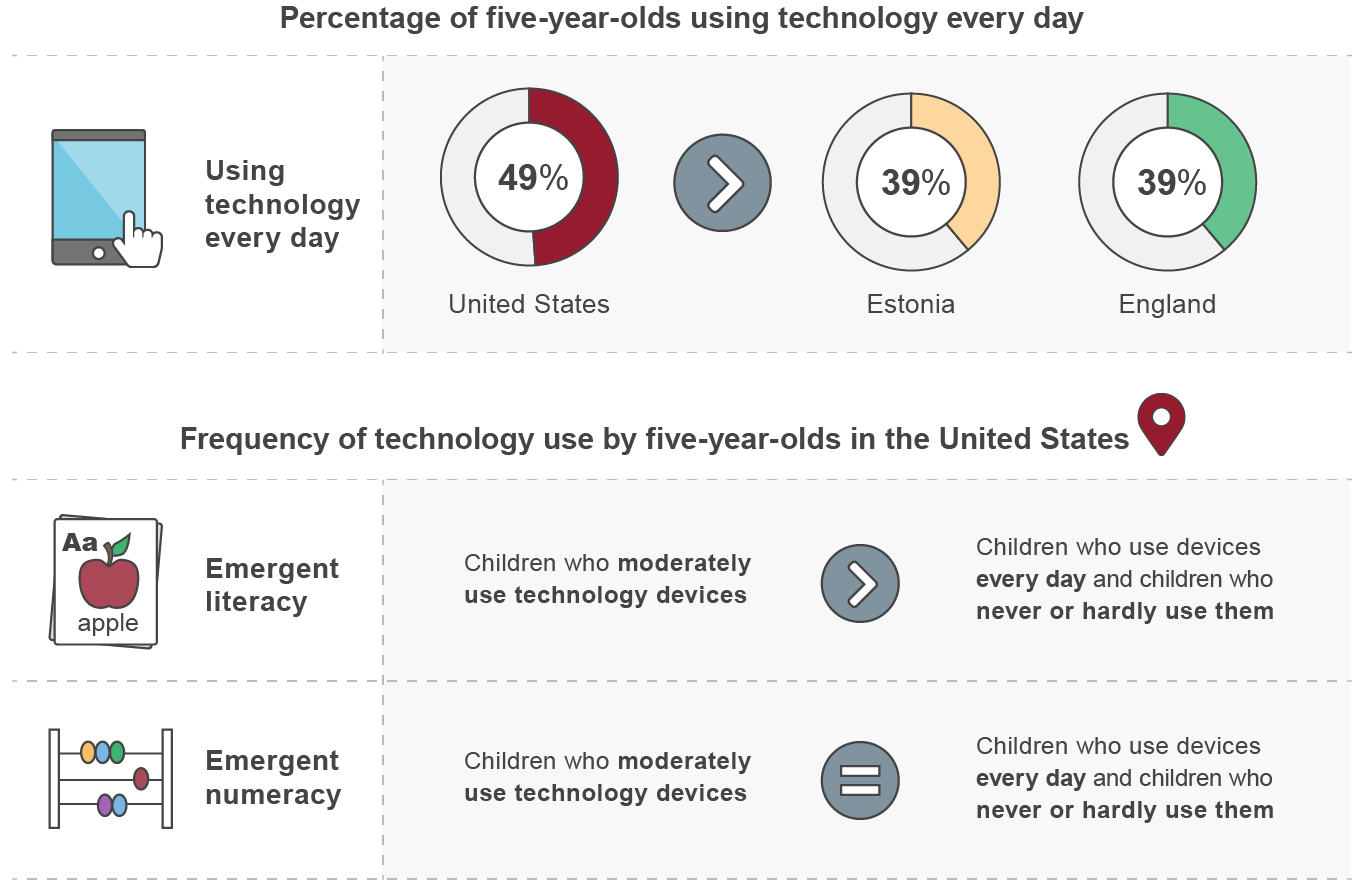 The United States was one of three countries that participated in 2018 in a pilot study coordinated by the Organization for Economic Cooperation and Development (OECD) to examine the early learning experiences of young children. The International Early Learning Study (IELS) was designed to directly assess 5-year-old children on the skills and competencies they exhibit as they enter formal schooling (in the United States, formal schooling typically begins with either public prekindergarten or kindergarten). Although the United States has a great deal of national data on 5-year-old children from the Early Childhood Longitudinal Study (ECLS), there is also interest in learning more about international comparisons of the skills and abilities of children as they approach the age of compulsory education. Additionally, there is interest in learning whether the IELS methodology of the direct assessment instrument—delivered exclusively on a digital tablet—is a valid and reliable tool for assessing 5-year-old children’s skills and competencies. Figure 1 displays a map that shows the three countries—the United States, England, and Estonia—that participated in the IELS 2018 pilot study.


The OECD has released an international report with preliminary findings from the IELS pilot study, as well as a Country Note, or national report, specific to the United States. These reports can be found here (IELS). A description of the study and highlights from the OECD reports are provided below.

The main objective of IELS is to directly assess 5-year-old children across multiple countries using current technology. In the pilot study, children were sampled from schools with kindergartens across the United States and from schools and from early childhood education and care (ECEC) 1  centers across England and Estonia.

The children engaged with the tablet-based assessment through interactive activities in which they touched the picture that corresponded to their response or dragged and dropped items. A trained assessor sat with each child, helping him or her to navigate through the assessment on the tablet. Children did not need prior experience with tablets to complete the assessment. Additionally, children did not need to read to complete the assessment. The assessment was narrated in English in the United States and England by two child characters called Tom and Mia. The assessment measured children’s emergent literacy (e.g., listening comprehension, vocabulary, phonological awareness), emergent numeracy (e.g., numbers and counting, measurement, patterns), self-regulation (i.e., executive function), and social and emotional skills (e.g., emotional identification, prosocial behavior, trust). The assessment domains can be found in the graphic above.

In the United States, 93 percent of the children sampled participated in the assessment. Of these children, 71 percent had parents who answered questions about their child’s skills and knowledge, their previous ECEC participation, their family demographics, and their home learning environment. In addition, 96 percent had teachers who completed questionnaires, providing information about their professional background and rating the children in their classrooms on their skills and knowledge.

Overall, the OECD found that England and Estonia outperformed the United States on the direct assessment of emergent literacy. England scored highest on the direct assessment of emergent numeracy, followed by Estonia and then the United States. Below is a discussion of additional preliminary findings from the IELS 2018 pilot study.

Expand All | Collapse All

Parents were asked how often they read to their 5-year-old children. Parents in all three countries reported reading to their children, although compared to the United States, parents in England did so more often and parents in Estonia did so less often. In all three countries, being read to more frequently by a parent was associated with higher emergent literacy scores. In the United States, children whose parents reported reading to them 5 days a week to every day or 3 to 4 days a week had significantly higher emergent literacy scores than children whose parents who reported reading to them less than once a week or not at all. Additionally, across all three countries, children who were read to more often were better able to recognize and understand emotions.

Figure 3. Parents’ reports of reading to their child: IELS 2018

Participation in Early Childhood Education and Care Programs Before Age 5

Participation in early childhood programs and support for parental leave differed across the three countries participating in the IELS pilot study.

NOTE: Children are identified as having “attended ECEC” if they ever attended an ECEC program prior to participating in the IELS study.

The IELS pilot study shows that 5-year-olds can be accurately assessed via tablet in a variety of skills and competencies. Moreover, participation in the IELS pilot study has provided the United States with a better understanding of what 5-year-olds in this country can do relative to international peers in England and Estonia. Additionally, the findings from the IELS pilot study will inform the revision and development of future IELS instruments. The OECD plans to administer the IELS study again in 2023 with additional countries using updated instruments to further the study’s contribution to the international early learning landscape.


1 Early Childhood Education and Care (ECEC) refers to preprimary school programs for children from birth through age 5 that provide an intentional educational component along with care. In the United States, these programs are housed in daycare centers, preschools, and public prekindergarten classrooms and have a focus on helping children learn and grow in ways that prepare them for formal schooling.