Download the complete report in a PDF file for viewing and printing. (368K PDF) 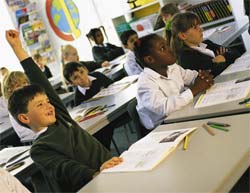 The National Assessment of Educational Progress (NAEP) conducted a pilot study of America’s charter schools and their students as part of the 2003 NAEP assessments in reading and mathematics at the fourth-grade level. NAEP also surveyed participating charter schools about their practices, structure, and governance.

For example, the final sample of 150 charter schools was obtainable only after multiple sources of information were consulted. Information from local school administrators, follow-up interviews, and field staff were used to update and verify the original school questionnaire data.

There are also instances where the performance of students with shared characteristics differed. For example, among students eligible for free or reduced-price lunch, fourth-graders in charter schools did not score as high in reading or mathematics, on average, as fourth-graders in other public schools.

When considering these data, it should be noted that the charter school population is rapidly changing and growing. Future NAEP assessments may reveal different patterns of performance. Further, NAEP does not collect information about students’ prior educational experience, which contributes to present performance. Nonetheless, the data in this report do provide a snapshot of charter school students’ current performance.

Download the complete report in a PDF file for viewing and printing. (368K PDF)