Download the complete report in a PDF file for viewing and printing. 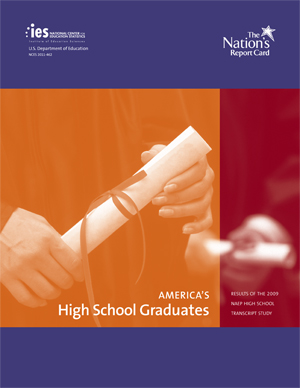 This report presents information about the types of courses 2009 high school graduates took during high school, how many credits they earned, and the grades they received. Information on the relationships between high school records and performance in mathematics and science on the National Assessment of Educational Progress (NAEP) is also included. Transcripts were collected from about 640 public schools and 80 private schools for the 2005 High School Transcript Study (HSTS). These transcripts constituted a nationally representative sample of 26,000 high school graduates, representing approximately 2.7 million 2005 high school graduates. The 2005 results are compared to the results of earlier transcript studies, and differences among graduates by race/ethnicity, gender, and parent education are examined. Because the study is restricted to high school graduates, it contains no information about dropouts who may differ from graduates. Graduates who receive a special education diploma or certificate of completion are also excluded from analyses in this report unless noted otherwise.

The report also takes a closer look at the following topics:

NCES 2011-462: See the entry in the NCES database for contact and ordering information, and for links to similar topics

For more information, see the results of the 2009 NAEP High School Transcript Study on the Nation's Report Card website.