Achievement Gaps: How Black and White Students in Public Schools Perform in Mathematics and Reading on the National Assessment of Educational Progress 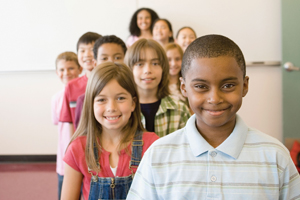 White students, however, had higher scores than Black students, on average, on all assessments. While the nationwide gaps in 2007 were narrower than in previous assessments at both grades 4 and 8 in mathematics and at grade 4 in reading, White students had average scores at least 26 points higher than Black students in each subject, on a 0-500 scale. This report will use results from both the main NAEP and the long-term trend NAEP assessments to examine the Black-White achievement gaps, and changes in those gaps, at the national and state level.

The main NAEP 2007 Reading and Mathematics Assessments included grade 4 and grade 8 students both nationally and for all 50 states, as well as the Department of Defense Education Activity (DoDEA) and the District of Columbia (hereinafter referred to as states). Not all states had Black (or White) student populations large enough to provide reliable data, and not all states participated in the earliest NAEP state assessments.

At both ages 9 and 13, mathematics scores for both Black and White students were higher in 2004 than in any previous assessment. The 23-point Black-White achievement gap in mathematics for age 9 public school students in 2004 was narrower than in the first assessment in 1978 but not significantly different from the gap in the most recent previous assessment in 1999. The same was true for the 26- point gap at age 13.

For age 9 reading, scores for both Black and White students were higher in 2004 than in any previous assessment, going back to 1980. The 26-point gap between Black and White students in 2004 was not significantly different from the gap in 1980, but was narrower than the gap in 1999. At age 13 reading, scores were higher for Black students in 2004 than in 1980, but did not show a significant difference from 1999. Scores for White students were not significantly different for either comparison year. The 21-point gap in student performance at age 13 reading in 2004 was narrower than in both 1980 and 1999.

The following two sections summarize state-level achievement gaps between Black and White students in the main NAEP assessments in mathematics and reading.

The NAEP reading and mathematics scales make it possible to examine relationships between students’ performance and various background factors measured by NAEP, such as race. However, a relationship that exists between achievement and another variable does not reveal its underlying cause, which may be influenced by a number of other variables. Similarly, the assessments do not reflect the influence of unmeasured variables. At the state level, changes in the size of the achievement gap between Black and White students could be affected by demographic changes in the size and makeup of the populations involved, as well as policy changes in the schools and communities. The results of this study are most useful when they are considered in combination with other knowledge about the student population and the education system, such as trends in instruction, changes in the school-age population, and societal demands and expectations.

This report focuses on the size of the achievement gap between Black and White students and the direction of average scores within states, regardless of the states’ scores. Large gaps may occur in some states with scores above the national average, as well as in states with scores below the national average. Similarly, small gaps may occur in states with scores above or below the national average. All differences discussed in this report are statistically significant at the .05 level after controlling for multiple comparisons. The technical notes for this report provide information about sampling, accommodations, interpreting statistical significance, and other technical features. For more information on both the main NAEP and long-term trend assessments, see appendix A.

NCES 2009-455 See the entry in the NCES database for contact and ordering information, and for links to similar topics.