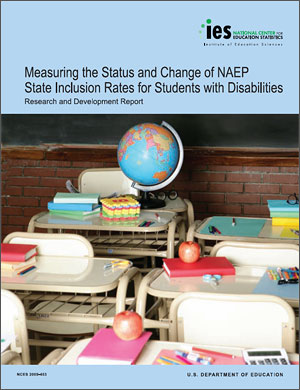 Since the late 1990s, participation rates of students with disabilities (SDs) in the National Assessment of Educational Progress (NAEP) from different states have fluctuated. To address concerns that these changes may affect the validity of reports on achievement trends, NAEP has

States’ procedures for including and accommodating students with disabilities are also evolving.

To measure whether these strategies and changes are associated with higher state-by-state inclusion rates, we have developed two distinct approaches for comparing state inclusion rates with one another and gauging progress in their improvement over time. Both approaches rely on regression analysis to estimate the relationship between a student’s characteristics and the probability that the student is included on the NAEP assessment. One approach, the nation-based one, estimates one regression using data pooled from all states. The other, the state-specific approach, estimates the regression separately for each state. The relationships are estimated using individual-level data and are then used to establish expectations (or predicted probabilities) for the inclusion of students with disabilities with different characteristics. Individual-level predicted probabilities are aggregated to the state level to form state-level expected inclusion rates. The two approaches examined changes in inclusion rates from 2003 to 2005 and from 2005 to 2007 for grades 4 and 8 mathematics and reading assessments.

For the comparison between 2005 and 2007 described in this report, the two approaches produced similar results when comparing the indices of baseline status of inclusion and change over time:

For more information, learn about how NAEP works to increase inclusion for students with disabilities in large-scale assessments and about the potential effects of exclusion upon educational assessments.