Download the complete report in a PDF file for viewing and printing. (422K PDF) 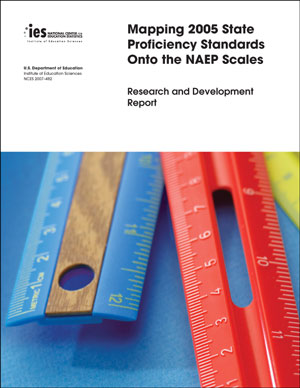 Under the No Child Left Behind Act (NCLB), states are required to report the percentages of students achieving proficiency in reading and mathematics for grades 3 through 8. For each subject and grade combination, the percentages vary widely across states. For grades 4 and 8, these percentages can be compared to the estimated percentages of students achieving proficiency with respect to the standard established by the National Assessment of Educational Progress (NAEP). Again, large discrepancies are observed. This variation could derive from differences in both content standards and student academic achievement from state to state, as well as from differences in the stringency of the standards adopted by the states. Unfortunately, there is no way to directly compare state proficiency standards because states are free to select the tests they employ and to establish their own performance standards.

This report presents the results of applying a methodology for mapping state proficiency standards in reading and mathematics onto the appropriate NAEP scale, employing data from the 2004–05 academic year. The mapping exercise was carried out for both grades 4 and 8. For each of the four subject and grade combinations, the NAEP score equivalents to the states’ proficiency standards vary widely, spanning a range of 60 to 80 NAEP score points. Although there is an essential ambiguity in any attempt to place state standards on a common scale, the ranking of the NAEP score equivalents to the states’ proficiency standards offers an indicator of the relative stringency of those standards.

These results should be employed cautiously, as differences among states in apparent stringency can be due, in part, to reasonable differences in the assessment frameworks, the types of item formats employed, and the psychometric characteristics of the tests. Moreover, there is some variation among states in the proportion of NAEP sample schools that could be employed in the analysis.

Download the complete report in a PDF file for viewing and printing. (422K PDF)