Skip to main content
Skip Navigation
The Nation’s Report Card: Mega-States:
An Analysis of Student Performance in the Five Most Heavily Populated States in the Nation

Download The Nation’s Report Card: Mega-States: An Analysis of Student Performance in the Five Most Heavily Populated States in the Nation 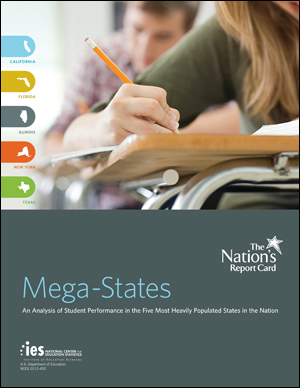 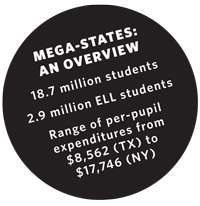 The importance of these “Mega-States” goes beyond the sheer size of their population. They now serve more than half of the nation’s English language learners (ELL), as well as some of the largest concentrations of children from lower-income families. As policymakers and educators look at the nation’s changing demographics and explore ways to close achievement gaps, the educational progress of children in these states is of interest far beyond their state borders. That’s why the National Center for Education Statistics and the National Assessment Governing Board focused this special report on educational outcomes in the five largest states.

A snapshot of the Mega-States

The Mega-States are home to nearly one-third of the nation’s public schools.

The Mega-States are at the forefront of the demographic shifts in our nation. California, Texas, New York, and Florida had the largest increases in the immigrant population over the last decade. Illinois had the sixth largest increase.1

Most of our ­nation’s ELL students are being educated in the Mega-States. California enrolls nearly 1.5 million ELL students—the largest number in the nation. That’s more than twice the amount of any other Mega-State.

Resources vary widely across the Mega-States

Although the five Mega-States share many common characteristics, they have important differences. For example, expenditures per pupil ranged from $8,562 in Texas to $17,746 in New York, while the national average is $10,591.

Download The Nation’s Report Card: Mega-States: An Analysis of Student Performance in the Five Most Heavily Populated States in the Nation

For more information, see the results of the Mega-States report on the Nation's Report Card website.