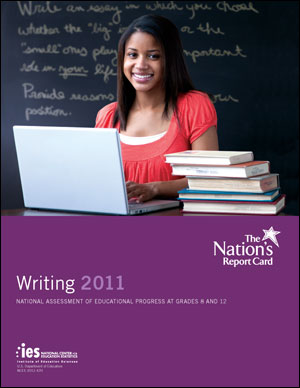 Learn more about the writing results in this short video

Writing in the 21st century is defined by its frequency and its efficiency. It is clear that the ability to use written language to communicate with others—and the corresponding need for effective writing instruction and assessment—is more relevant than ever. Reflecting current practice and recognizing the impact of communication technologies on the way students compose their writing, the National Assessment of Educational Progress (NAEP) administered the first computer-based assessment in writing in 2011.

In this new national writing assessment sample, 24,100 eighth-graders and 28,100 twelfth-graders engaged with writing tasks and composed their responses on computer. The assessment tasks reflected writing situations common to both academic and workplace settings and asked students to write for several purposes and communicate to different audiences. The results of the 2011 writing assessment offer a new opportunity to understand the ability of eighth- and twelfth-grade students to make effective choices in their writing and allow for insight into the role and impact of technology on writing education and performance.

For the first year of this computer-based writing assessment, new scales and achievement levels were established. The scales for grades 8 and 12 were developed separately and range from 0 to 300 with a mean set at 150 for each grade. Additional results are reported based on students’ demographic characteristics, educational experiences, and the frequency of engaging in actions available to them in word-processing software.

Twenty-four percent of students at both grades 8 and 12 performed at the Proficient level in writing in 2011. The NAEP Proficient level represents solid academic performance for each grade assessed. Students performing at this level have clearly demonstrated the ability to accomplish the communicative purpose of their writing.

Fifty-four percent of eighth-graders and 52 percent of twelfth-graders performed at the Basic level in writing in 2011. The Basic level denotes partial mastery of the prerequisite knowledge and skills that are fundamental for proficient work at each grade.

Three percent of eighth- and twelfth-graders in 2011 performed at the Advanced level. This level represents superior performance.

At grade 8, average writing scores were

At grade 12, average writing scores were

Data collected from the computer-based writing assessment provided information about the extent to which students engaged in certain actions on the computer as they responded to the writing tasks. Information is reported for 23 unique actions students performed as they either viewed the writing prompts or wrote and edited their responses.

Results for the student actions are reported as the percentages of students engaging in the action with varying frequency, and the average writing score for those students. For example, at both grades 8 and 12, students who used the thesaurus tool more frequently scored higher on average than students who engaged in this action less frequently. Twelve percent of eighth-graders and 15 percent of twelfth-graders used the thesaurus two or more times during the assessment.

Below is a snapshot of the interface students used as well as data on some of the actions they engaged in while viewing the prompts or editing their responses. 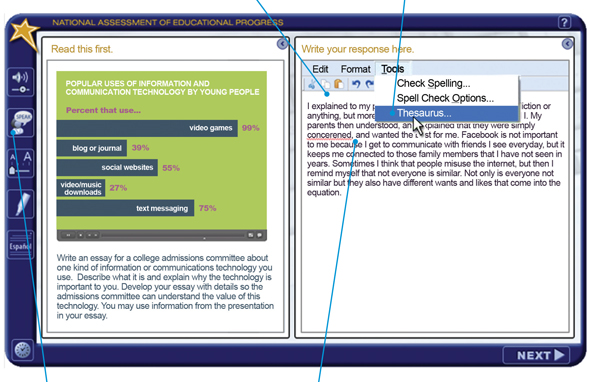