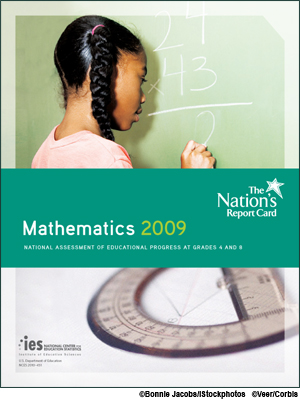 Mathematics scores up since 2007 at grade 8, but unchanged at grade 4

Gaps persist despite gains for some student groups

Mathematics scores up since 2007 at grade 8, but unchanged at grade 4

Nationally representative samples of more than 168,000 fourth-graders and 161,000 eighth-graders participated in the 2009 National Assessment of Educational Progress (NAEP) in mathematics. At each grade, students responded to questions designed to measure their knowledge and abilities across five mathematics content areas: number properties and operations; measurement; geometry; data analysis, statistics, and probability; and algebra.

Gains in students’ average mathematics scores seen in earlier years did not continue from 2007 to 2009 at grade 4 but did continue at grade 8. While still higher than the scores in the six assessment years from 1990 to 2005, the overall average score for fourth-graders in 2009 was unchanged from the score in 2007. The upward trend seen in earlier assessments for eighth-graders continued with a 2-point increase from 2007 to 2009.

Gaps persist despite gains for some student groups

Results for student groups were generally similar to those for students overall. At grade 4, there were no significant changes in the average mathematics scores from 2007 to 2009 for students in different racial/ethnic groups, or for those attending public or private schools. Scores for these groups did, however, remain higher than the scores in 1990.

There was no significant change at grade 4 in either the White – Black or White – Hispanic score gaps since 2007. However, greater gains over the years for Black students than for White students contributed to a smaller score gap in 2009 than in 1990. The gap between private and public school students in 2009 was not significantly different from the gap in 2007, but was narrower than the gap in 1990.

At grade 8, average mathematics scores were higher in 2009 than in both 2007 and 1990 for most racial/ethnic groups; however, gaps between White and Black students and between White and Hispanic students showed no significant change in comparison to either year.

For more information, see the results of the 2009 Mathematics assessment on the Nation's Report Card website.