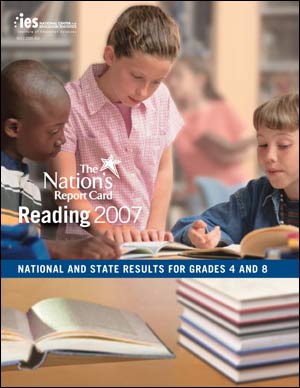 Reading skills are improving for both fourth- and eighth-graders, particularly among lower- and middle-performing students. Many student groups made gains in both grades; however, these gains were not always accompanied by significant closing of racial/ethnic and gender gaps.

Students demonstrated their reading comprehension skills by responding to questions about various types of reading passages on the 2007 National Assessment of Educational Progress (NAEP) reading assessment. Reading abilities were assessed in the contexts of literary experience, gaining information, and performing a task.

A nationally representative sample of more than 350,000 students at grades 4 and 8 participated in the 2007 reading assessment. Comparing these results to results from previous years shows the progress fourth- and eighth-graders are making both in the nation and in individual states.

Fourth-graders scored higher in 2007 than in all the previous assessment years. The average reading score was up 2 points since 2005 and 4 points compared to the first assessment 15 years ago. Higher percentages of students were performing at or above the Basic and Proficient achievement levels in 2007 than in previous years.

The average reading score for eighth-graders was up 1 point since 2005 and 3 points since 1992; however, the trend of increasing scores was not consistent over all assessment years. In comparison to both 1992 and 2005, the percentage of students performing at or above the Basic level increased, but there was no significant change in the percentage of students at or above the Proficient level.

White, Black, and Hispanic students in both grades make gains

As indicated on the chart below, White, Black, and Hispanic students all scored higher in 2007 than in the first assessment 15 years ago at both grades 4 and 8. However, improvements for minority students did not always result in the narrowing of the achievement gaps with White students. Only the White – Black gap at grade 4 was smaller in comparison to the gaps in 2005 and 1992.

For more information, see the results of the 2007 Reading assessment on the Nation's Report Card website.