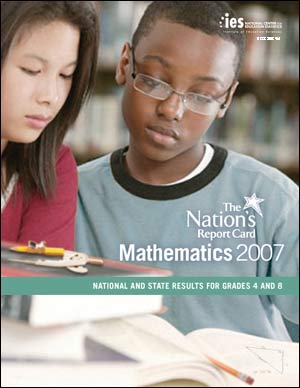 Both fourth- and eighth-graders reached a higher level of performance in 2007 compared to earlier assessment years.

The 2007 National Assessment of Educational Progress (NAEP) evaluated students’ understanding of mathematics concepts and their ability to apply mathematics to everyday situations. Students demonstrated their knowledge of these critical skills by responding to questions about number properties and operations, measurement, geometry, data analysis and probability, and algebra.

A nationally representative sample of more than 350,000 students at grades 4 and 8 participated in the 2007 mathematics assessment. Comparing these results to results from previous years shows the progress fourth- and eighth-graders are making both in the nation and in individual states.

The mathematics score for Asian/Pacific Islander students was higher in 2007 than in previous assessment years for grade 4, but at grade 8 showed no significant change from 2005 to 2007.

For more information, see the results of the 2007 Mathematics assessment on the Nation's Report Card website.