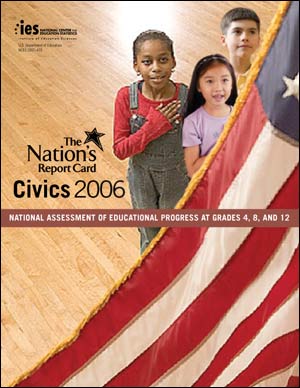 The 2006 NAEP civics assessment evaluated students’ understanding of the democratic institutions and ideals necessary to become informed citizens in shaping America’s future. Students demonstrated this knowledge in areas deemed important for citizenship in our constitutional democracy. A nationally representative sample of more than 25,000 students at grades 4, 8, and 12 was assessed in 2006. The results are compared with those of the 1998 civics assessment.

About two out of three American students at grades 4, 8, and 12 have at least a basic knowledge of civics according to the 2006 National Assessment of Educational Progress (NAEP). Average scores improved from 1998 to 2006 only at grade 4. Most of this improvement was seen among lower-performing students.

Three of four students at grade 4, or 73 percent, scored at or above Basic, meaning they demonstrated at least a partial mastery of civics knowledge and skills fundamental for proficient work at their grade. About one in four students, or 24 percent, scored at or above the Proficient level, meaning they demonstrated at least competency over challenging subject matter. Many fourth-grade student groups had higher scores in 2006.

For more information, see the results of the 2006 Civics assessment on the Nation's Report Card website.