Download the complete report in a PDF file for viewing and printing. (949K PDF) 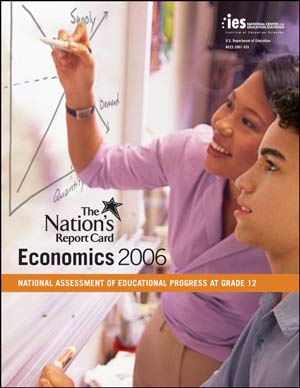 Knowledge of economics is important for individuals to function effectively as citizens in an increasingly connected world economy. Economic literacy includes understanding how economies and markets work, what the benefits and costs of economic interaction and interdependence are, and that people have to make choices because resources are limited. In recent decades, the focus on economics content in the school curriculum has increased.

In this first NAEP assessment of economics at grade 12, the overall average economics score, set at 150, fell within the Basic achievement level. Seventy-nine percent of students performed at the Basic level or higher, and 42 percent performed at the Proficient level or higher, including 3 percent at the Advanced level. Results are based on a nationally representative sample of 11,500 twelfth-grade students from 590 public and nonpublic high schools.

Some Key Findings Include

Students answered questions representing a wide range of content from three areas: market, national, and international economics. Market economy—traditionally described as microeconomics—covers how individuals, businesses, and institutions make decisions about allocating resources in the marketplace. National economy—traditionally described as macroeconomics—encompasses the sum of decisions made by individuals, businesses, and government. International economy concentrates on international trade—how individuals and businesses interact in foreign markets. The questions described below and presented in this report illustrate the knowledge and skills assessed in these three content areas. The full assessment includes questions that cover a range of topics and difficulty levels within each content area.

Download the complete report in a PDF file for viewing and printing. (949K PDF)

For more information, see the results of the 2006 Economics assessment on the Nation's Report Card website.