The differences between scale scores and between percentages discussed in the results take into account the standard errors associated with the estimates. Comparisons are based on statistical tests that consider both the magnitude of the difference between the group average scores or percentages and the standard errors of those statistics. Throughout the results, differences between scores or between percentages are discussed only when they are significant from a statistical perspective.

All differences reported are significant at the 0.05 level with appropriate adjustments for multiple comparisons. The term "significant" is not intended to imply a judgment about the absolute magnitude or the educational relevance of the differences. It is intended to identify statistically dependable population differences to help inform dialogue among policymakers, educators, and the public.

Comparisons across states use a t-test to detect whether a difference is statistically significant. A t test is the method most commonly used to evaluate the differences in means between two groups. There are four possible outcomes when comparing the average scores of jurisdictions A and B:

When comparing all jurisdictions to each other, the testing procedures are based on all pairwise combinations of the jurisdictions in a particular year or pair of years. It may be possible that a given state or jurisdiction has a numerically higher average scale score than the nation or another state but that the difference is not statistically significant, while another state with the same average score may show a statistical significance compared to the nation or the other state. These situations may arise due to the fact that standard errors vary across states/jurisdictions and estimates. 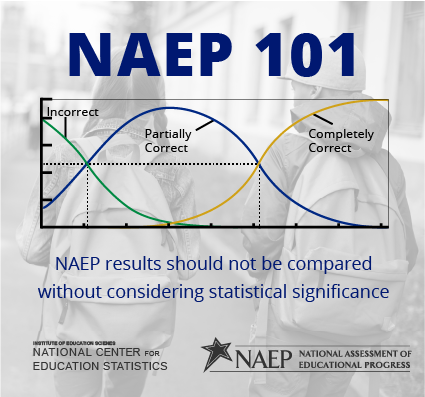 The average scores and percentages presented are estimates because they are based on the achievement data of representative samples of students rather than on the entire population of students. Moreover, no single student takes the entire NAEP assessment. Each student answers only a sample of questions in up to two subject areas. As such, NAEP results are subject to a measure of uncertainty, reflected in the standard error of the estimates. The standard errors for the estimated scale scores and percentages in the figures and tables presented are available through the NAEP Data Explorer.

What is a representative sample? What is standard error? NAEP Data Explorer

The first source of uncertainty arises from the fact that NAEP only assesses a sample of students, rather than every eligible student (a census). The sample consists of a number randomly selected students. Carefully constructed surveys can yield very precise estimates of population quantities. But, a different, equally good sample of students could be have been selected, and the results based on the second sample would be slightly different. Thus, the first component of the standard error is due to sampling of students, termed "sampling variance."

The second source of uncertainty in NAEP results is due to "measurement." Measurement variance arises from the fact that a student’s proficiency in a subject (e.g., how good the student is at mathematics), is not directly observed, but has to be estimated based on the answers that the student provides to the items on the assessment. It is possible that, were the assessment given on a different day, the student might provide slightly different answers. Similarly, a different version of the assessment, comprised of different but equally valid items, would give slightly different estimates of students’ proficiency. These two factors give rise to what is typically termed "measurement variance."

NAEP assessments contain a third, related source of measurement uncertainty, due to sampling of items. The contents of all NAEP assessments are created according the specifications of a framework, which is created by the National Assessment Governing Board. NAEP frameworks are quite broad and multifaceted, and the resulting assessments are long. Taking the full assessment would require approximately 5-6 hours for each student, which is unreasonable to ask of students. To limit the burden on individual students, NAEP items are grouped into blocks requiring 25-30 minutes to complete. Each student receives a book of two blocks. The fact that students did not take the entire assessment is an additional source of measurement uncertainty.

A third source of uncertainty affects some NAEP comparisons. In 2017, NAEP began its transition from paper and pencil format to digital format. In the digital assessment, the items are presented, and students respond, using a tablet. The transition from paper mode to digital mode required a special study in which two parallel (randomly equivalent) groups of students took the assessment, one on paper and the other on tablet. Based upon the responses of these two groups of students, the scale of the digital assessment was "linked" to the existing paper and pencil NAEP scale. Because the linking is based on samples of students, the link could have been slightly different if different students were sampled for the study. This source of uncertainty is termed "linking variance."

The final variance of a NAEP result is the sum of sources of variance. The standard error is the square root of that variance.