Question:
How many schools have written plans for emergency scenarios, such as a pandemic disease?


The School Survey on Crime and Safety (SSOCS), which collects data from a nationally representative sample of 4,800 K–12 public schools, asks schools to report on whether or not they have a written plan that describes the procedures to be performed in select scenarios. Data from the 2017–18 SSOCS show a strong majority of the nations schools have a written plan for certain emergency scenarios, such as natural disasters, active shooters, and bomb threats, but fewer than half have a written plan for a pandemic disease.

Schools can play an important role in slowing the spread of diseases and protecting vulnerable students and staff, in part by implementing strategies to help ensure safe and healthy learning environments.1 The close proximity of students and staff in classroom settings can increase the risk of community transmission of diseases, which is why schools should work in close collaboration and coordination with local health departments on decisions related to determining risks and implementing school-based strategies. One aspect of school efforts to maintain safety is to have a plan in place for procedures to prevent and mitigate the spread of diseases. These plans may include guidelines on prevention efforts; coordination with local health officials; cleaning and disinfecting school spaces; communicating with staff, parents, and students; making decisions on short- and long-term dismissal of students; and implementing strategies to continue education and other supports for students.

Forty-six percent of public schools reported they had a written plan for procedures to be performed in the event of pandemic disease during the 2017–18 school year. This percentage was lower than the percentage of schools reporting that they had written plans for every other type of scenario asked about in the SSOCS questionnaire with the exception of hostage scenarios, for which the percentage of schools with such a plan was not measurably different.

Percentage of public schools that had a written plan describing procedures to be performed in various crisis scenarios: School year 2017–18

1 Examples of natural disasters provided to respondents were earthquakes or tornadoes.
2 "Active shooter" was defined for respondents as an individual actively engaged in killing or attempting to kill people in a confined and populated area; in most cases, active shooters use firearm(s) and there is no pattern or method to their selection of victims.
3 Examples of chemical, biological, or radiological threats or incidents provided to respondents were the release of mustard gas, anthrax, smallpox, or radioactive materials.
NOTE: Responses were provided by the principal or the person most knowledgeable about school crime and policies to provide a safe environment.

There were few measurable differences in the percentages of schools reporting plans for pandemic disease when looking across school characteristics. However, some differences were observed based on the enrollment size of the school. In 2017–18, the percentage of schools with enrollments of less than 300 students that reported having a written plan for pandemic disease (38 percent) was lower than the corresponding percentages of schools with enrollments of 300 to 499 students (48 percent), 500 to 999 students (48 percent), and 1,000 or more students (49 percent). However, in no enrollment size group did a majority of schools have a written plan.

Percentage of public schools that had a written plan describing procedures to be performed in a pandemic disease scenario, by enrollment size: School year 2017–18

NOTE: Responses were provided by the principal or the person most knowledgeable about school crime and policies to provide a safe environment.

Estimates of schools reports of written plans for pandemic flu followed no clear pattern between the 2007–08 and 2015–16 school years. Fifty-one percent of schools reported having a plan for pandemic flu in 2015–16, which was lower than the percentage that reported such a plan in 2009–10 (69 percent)2 but higher than the percentage that reported such plan in 2007–08 (36 percent).

Percentage of public schools that had a written plan describing procedures to be performed in a pandemic flu or pandemic disease scenario, by school year: Selected years, 2007–08 to 2017–18 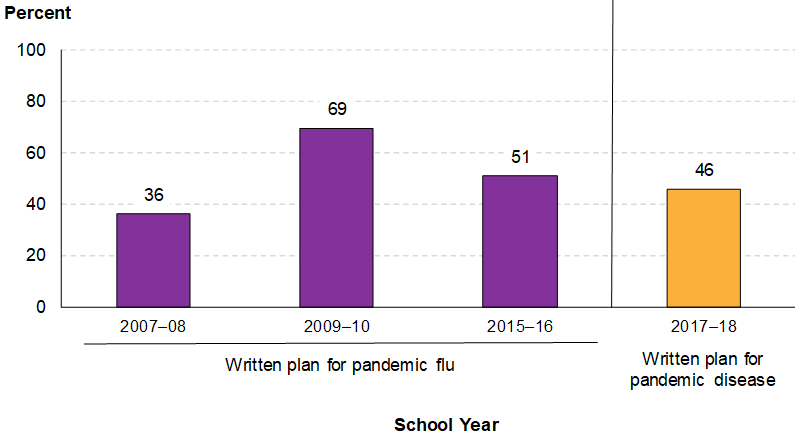 NOTE: SSOCS:2008, SSOCS:2010, and SSOCS:2016 asked schools to report on whether or not their school had a written plan to be performed in the scenario of pandemic flu, while the item was modified for SSOCS:2018 to ask schools about written plans for pandemic disease. Due to this change, comparisons of estimates between SSOCS:2018 and earlier years should be made with caution. Responses were provided by the principal or the person most knowledgeable about school crime and policies to provide a safe environment.

1 Centers for Disease Control (CDC) Interim Guidance for Administrators of US K–12 Schools and Childcare Programs. Retrieved March 18, 2020, from https://www.cdc.gov/coronavirus/2019-ncov/community/schools-childcare/guidance-for-schools.html.

2 From April 2009 to April 2010, a novel influenza A (H1N1) virus pandemic occurred in the United States and across the world; schools reports of plans for pandemic flu during the 2009–10 school year may reflect heightened awareness and responses to the H1N1 pandemic. See https://www.cdc.gov/flu/pandemic-resources/2009-h1n1-pandemic.html for more information.