FIGURE 1. Percentage of public high school graduates who enrolled in postsecondary education within 8 years of graduation, overall and by high school career and technical education (CTE) credits: High school classes of 1992 and 2004 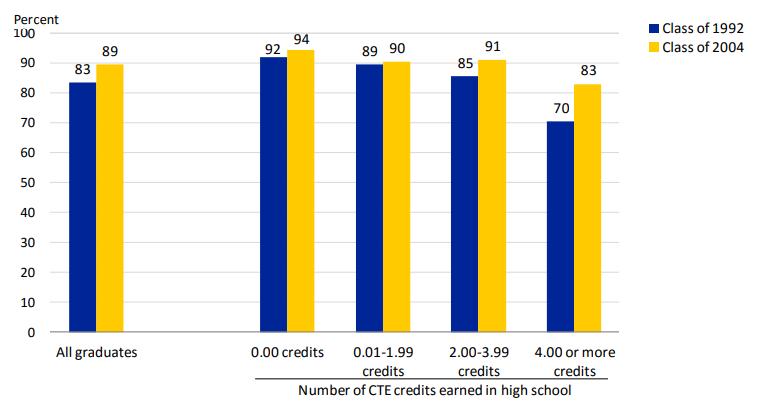 This Data Point uses data from two nationally representative studies of public and private high school students: the National Education Longitudinal Study of 1988 (NELS:88), which began with a sample of over 24,000 eighth-grade students, and the Education Longitudinal Study of 2002 (ELS:2002), which began with a sample of over 15,000 tenthgrade students, and their associated High School Transcript Studies. The Data Point reports data from these studies public high school graduates. Causal inferences should not be made from these correlational data.

The postsecondary enrollment rate within 8 years of high school graduation was higher for the class of 2004 than for the class of 1992 (89 percent versus 83 percent, respectively) (figure 1).

FIGURE 2. Percentage of public high school graduates who earned a postsecondary credential within 8 years of graduation, overall and by high school career and technical education (CTE) credits: High school classes of 1992 and 2004 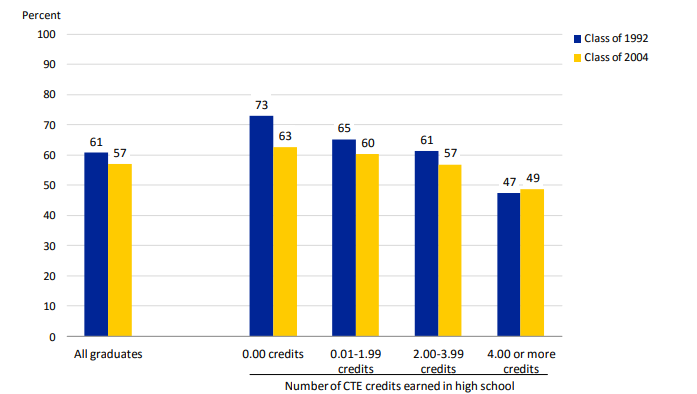 Attainment rates were lower in the more recent cohort than in the earlier cohort.

1 Postsecondary enrollment includes graduates who enrolled in postsecondary education (college, technical, or trade school) at any time during the 8 year period following high school graduation; postsecondary attainment includes graduates who earned a postsecondary credential (certificate or degree) during the same 8 year period.
2 A credit is equivalent to a one-year course taken for an hour each day. Students can earn less than 1 credit by taking a class that meets for less than an hour per day or for less than a full-year. CTE credits Include credits in the following occupational subject areas: Agriculture and natural resources; business; communications and design; computer and information sciences; construction and architecture; consumer and culinary services; engineering technologies; health sciences; manufacturing; marketing; public services; and repair and transportation.

This National Center for Education Statistics (NCES) Data Point presents information of education topics of current interest. It was authored by Lisa Hudson and Sharon Boivin of NCES. Estimates based on samples are subject to sampling variability, and apparent differences may not be statistically significant. All stated differences are statistically significant at the .05 level. In the design, conduct, and data processing of NCES surveys, efforts are made to minimize effects of non-sampling errors, such as item response, measurement error, data processing error, or other systematic error.